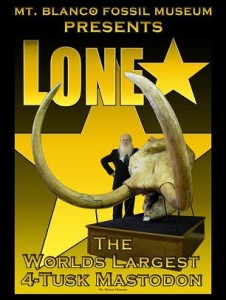 Because of mounting opposition to the sale resulting from both legal and other debts directly related to the skull, Mt. Blanco Fossil Museum filed for Chapter 13 Bankruptcy protection on Friday, January 18, 2008.  By filing for Bankruptcy protection the museum was able to keep the mastodon in the auction which was in danger of being pulled from the sale.  Because of the bankruptcy filing, the sale is still subject to the court’s approval.  However, the pre-auction estimate of the mastodon’s value was placed at $120,000-$160,000 and since the Mastodon met those expectations, Mt. Blanco Fossil Museum does not expect any problems with completing the sale.

Among the other items sold in the auction (see the gallery above) was a *Hadrosaur skull* that had been restored by Mt. Blanco Fossil Museum.

Prior to the auction, Joe Taylor was also hired by Heritage Auction Galleries to repair several damaged exhibits that were to be sold in the Natural History segment.  A cave bear skeleton, a T-Rex vertebra, a Russian mammoth tusk and an extinct saw toothed fish had all been damaged during shipping and moving.  After repairs were made these fossils were sold during Sunday’s auction.

Note: Only the Lone Star skull was sold in the auction.  The Companion Fossils will remain a part of Mt. Blanco’s collection for sale.

Joe Taylor was working with the bankruptcy court to complete the sale and deliver the mastodon skull. But when he was told that as soon as the mastodon was delivered, Heritage House Auctions was going to give the $127,000 to The DeRosa family who had gotten a judgment against him he refused to deliver it. Then, to the surprise of all, Taylor was thrown out of bankruptcy on a technicality. He appealed the decision. But in May 2008, unknown to Taylor, Heritage Auctions delivered the mastodon and gave the $127,000 to DeRosas. Following this, Taylor finally closed the Mt. Blanco Fossil Museum, the world’s largest Creation Fossil Museum. Joel Peck has moved to Colorado. Henry Johnson, who passed away in November, was working in California leaving only Taylor. The museum is open to some groups who call ahead and arrange a time when he will be there.
We regret to say, that as a result of this, we canceled the new Mt. Blanco Fossil News Magazine the day we launched it, Dec. 12, 2007. That was the day the Sheriff came to notify Taylor that the DeRosas had seized the Mastodon skull, his museum, his personal art  and life’s work and he was informed that it would all be sold at auction for pennies on the dollar a few weeks later. The museum was in a nightmare panic trying to figure out what to do with everyone else’s fossils stored in the museum. The Sheriff informed the DeRosas that Joe’s fossils would bring almost nothing in our small town where they would be sold. Taylor was forced to obtain a bankruptcy lawyer and friends raised $9,000 for legal fees. That amount of money doesn’t go very far in legal fees.
So, for the last several months Taylor has been proceeding pro se, without a lawyer. In 2008, it has already taken some 8 weeks of his time just to do the legal work and all that goes with it. The stress from the last two years has landed him in the emergency room three times incurring even more financial burdens. But Taylor’s health has improved with minimal medical help. His heart-felt thanks goes out to all the many faithful friends of Mt. Blanco who have helped in the legal struggle. Currently, Joe has two appeals pending, one in the bankruptcy court in Lubbock, Texas and one in the third Court of appeals in Austin, Texas. Your continued prayers are appreciated.
Share on Social Media: