Joe Taylor was asked to move a real mastodon skeleton across the state of Florida so in July 2014 he and his nephew, James Taylor, who is a carpenter, went to West Palm Beach where the mastodon had been stored in a semi trailer.  After reinforcing the supports which held the mastodon skeleton in place they had the driver make a test run down several streets.  While riding in the semi they were able to check for possible movement that might damage the skeleton.  Everything looked secure, so the driver left for the 200 mile drive across the state from Palm Beach on the east side of Florida to Southeastern University at Lakelands on the west side of the state.

The next challenge was to unload the skeleton which, even with the skull removed, the top vertebra reached a height of almost ten feet.  It was decided, after some discussion, that three forklifts could be used to securely hold up the mounted skeleton until it could be placed on the ground.  While 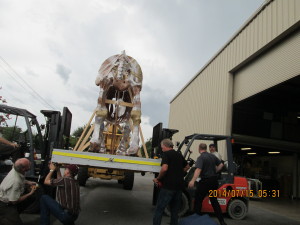 on the arms of the three forklifts, James and the other carpenters quickly added large casters to the bottom of the base and once on the ground, it was easily rolled into a secure work area at the university.

Once inside, James and Joe began repairing some of the bones that were damaged when it was removed from the museum where it had been displayed since 1969.  Our Hostess was Laney Elsford, who is the daughter of Mary Staton, the lady who is responsible for excavating and saving the mastodon that came to be affectionately know as “Susie Mastodon”.  From Laney, we learned the whole story about this mastodon and got a great tour of West Palm Beach, home of Rush Limbaugh and many other luminaries.

Where Susie was excavated was a swamp that is now the crossroads of a major freeway.  But she was not buried alone, as there were several other mastodons, mammoths, large bison, sloth, and other members of the so-called Ice Age megafauna.  Susie’s skeleton was totally complete until locals stole it’s pelvis and shoulder blades during the night when it was being excavated. 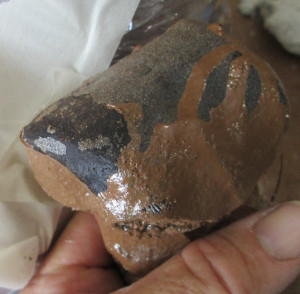 Another unfortunate thing was about to happen to this wonderful mastodon. Laney, the daughter of Mary Stanton (the lady who saved the mastodon in the first place), now learned that the museum was planning to paint it with a light brown and permanent coat of fiberglass resin!  Despite the advise of others who protested such an outlandish thing to do to a valuable fossil, the museum went ahead with their plan.

This disaster was followed by the unthinkable plan to display Susie outside in the weather!  At this point, Laney was able to get the museum to let Susie be relocated to another museum.  Joe Taylor offered to repaint the epoxy-covered fossil bones to their original dark brown color.

Look through our photo gallery of this exciting move, below.