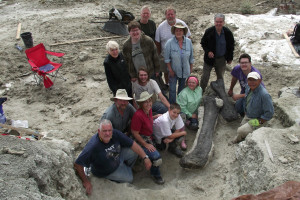 In August of 2014, Joe Taylor, Max Anton, and David Mikkelson joined Dr. Carl Baugh and several others for the annual fossil dig near Masadona, Colorado, heartland of dinosaurs found in the Morrison Formation.  These dinosaurs, known as the Jurassic group, are buried in massive numbers all over the Western slopes.  Digging since 1995, we have uncovered bones of several long-necked, long-tailed sauropods, two Allosaurs, turtles, crocodiles, an Ankylosaur (the massive armored dinosaur), and a baby dinosaur.  Most of the bones are jet-black and buried in cement-hard light grey rock which often requires jackhammers and much physical effort to free them from their graves.

Joe Taylor, who has been the lead excavator with Carl Baugh since 1995 contracted viral meningitis on the first day of the dig, becoming increasingly ill, and was at the dig site only long enough to show the team how a large vertebra lying directly on top of a large leg bone could be removed intact without damaging either bone.  The rest of the time Taylor spent in the hospital.  Joe’s brother, Tom, came to Colorado to take Joe home where he spent the next three weeks in bed.

Taylor said that the team did an excellent job in his absence and retrieved numerous bones from the difficult hard sediments.  “I was particularly grateful to Max Anton and David Mikkelson who were the only ones on the site when I went to the hospital, but took over and did a great job”.

On the last days with only Carl Baugh, Dale Muska, James LaCoste, and his mom, Belinda,  discovered a most exciting specimen with intriguing possibilities.