From Rock Stars to Fossils

On April 13th, 2016, James Taylor was starting a concert tour in Lubbock, Texas.  While he was here, he signed the original six foot square painting of James, done by Joe Taylor in 1974, saying that he remembered the billboard.

Before Joe Taylor was into painting realistic replicas of fossils he was painting realistic replicas of recording artists, like James Taylor.  Large records stores in Hollywood, such as Tower Records, the largest record store at the time, hired Joe to paint photo-realistic copies of newly released albums.  These giant paintings were six feet square, painted in artist oils on Masonite boards, that were hung outside the record stores to announce the release of a new album.    These billboards only stayed up for one month, after which they were painted over.

Taylor decided these had historic significance and started saving some of his own billboards.  This group of boards now makes up the only in-tact collection of these in the world.  Taylor also kept the paint pallets that were used to create the paintings, as well as the original brushes and other things.  Joe took hundreds of photographs of these paintings, many of them while they were being done.  He was more than just a billboard painter, as his other art includes corporate logos, type fonts (including “Blippo Black”, also called “Pump” and “Bauhaus”), magazine illustrations, album cover design, and huge, realistic replicas of bottles and boxes for commercials.

While Joe was still painting billboards, he began studying paleontology at the LaBrea Tar Pits in California.  Taylor applied his artistic ability to paleontology, which opened the door for an entire new career and eventually the opening of Mt. Blanco Fossil Museum.

Read more about the billboards here

(picture of some of the trilobites made by kids during a winter workshop)
Monday, May 30th
10:00am and 2:00pm
Mark your calendar –  bring your family to the first of our summer kids’ workshops at the museum. $10 per child.  More details to come.  Contact us if interested 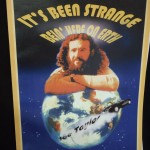 Joe Taylor writes about his experiences from Hollywood to dinosaur digs in his book, “It’s Been Strange Bein’ Here on Erth”