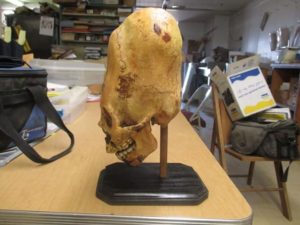 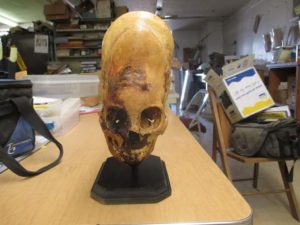 This skull was sent to me to be analyzed, molded, and reproduced on a very tight deadline.  I told the caretaker that it looked like a Paracas skull I had molded in Peru.  And it had no Sagittarius suture, but several Inca bones.

The original skull was featured on the show Ancient Aliens.  If you would like to see the episode where it was featured you can use the two links below.

Ancient Aliens said Cinnamon was a 12 to 15 yr old Scot! Joe Taylor asked Collins why the anthropologist said that. He replied, “I don’t know.” Joe said it was a 17 year-old with shoveled-out front teeth similar to North American Indians. LA Marzulli said the DNA was Egypt – India. His new film about this will be out in November. He may have more information: On the Trail of the Nephilim #6 DNA – The Final Results