Colorado Allosaur Dig – Joe Taylor and the Mt Blanco Team performed a rapid excavation of a vertebral column of an allosaur that was in danger of destruction. 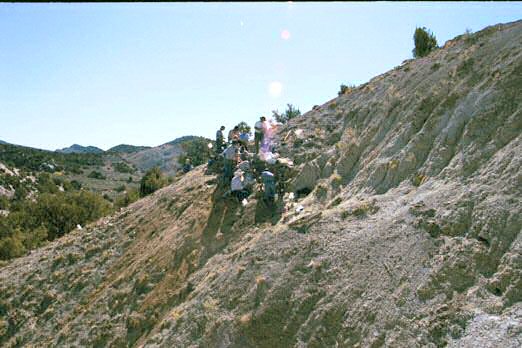 In the Spring of May 2001, while in Colorado a local landowner asked Joe Taylor and the Mt. Blanco team about the prospect of excavating dinosaur bones on his property. A quick survey was done of the land and the team came back in the Fall to do a more comprehensive survey. During that time it was decided to go ahead and excavate some vertebra of an allosaur (large meat eating dinosaur) that had been previously exposed and were threatened by rapid weathering and erosion. 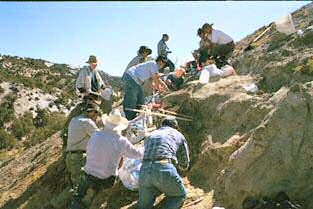 The bones were located precariously on a hillside which made excavation challenging. 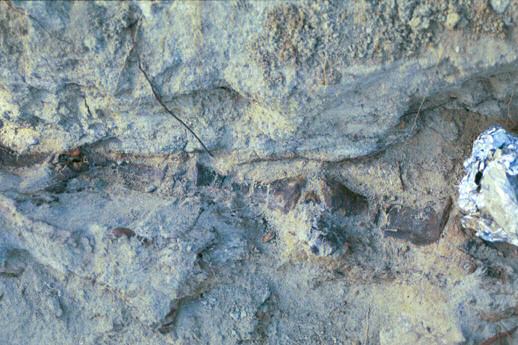 Amazing articulation Here are five articulated vertebra of the allosaur exposed at the site. This animal is supposed to have been lying here for over 140 million years, and yet the small chervons at the bottom of the tail vertebrate are still exactly as they were when the animal was buried. This is just one example of what one finds during dinosaur excavations which strongly argues against any  theory about millions of years. 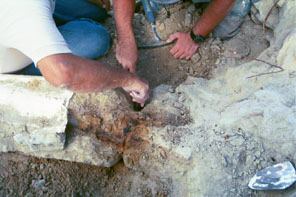 The vertebral column ran about twenty feet and there are parts still to be uncovered in future digs. 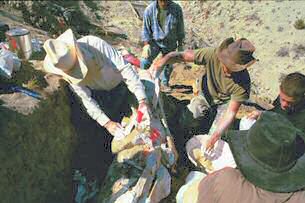 Here Joe Taylor, assisted by Peter DeRosa, is making a field jacket using plaster and burlap strips. Peter and his family found digging in the hard rock strata of Colorado for dinosaurs is considerably different from screening for sharks teeth in the wet sands of Florida. 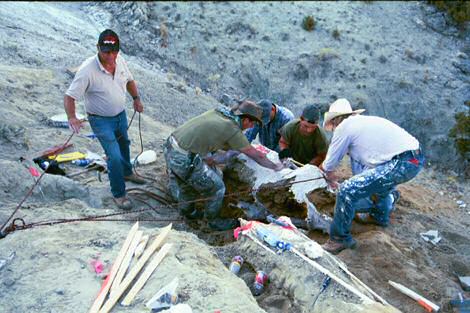 After the field jackets were prepared then came the process of removing them from the hillside. This took the help of several strong backs and a secure rope system being managed by Don Yaeger. 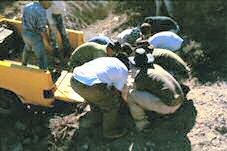 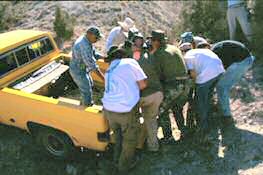 Finally the field jackets containing the bones were brought down from their hillside excavation site and with the help of more strong backs were lifted carefully to a pickup truck bed for transport from the site. These jackets weighted up to 400 lbs or more. They were taken to the Mt. Blanco Fossil Museum prep. facility to await restoration.