American Vision and My Pilgrim Kids

In a flash the eight of us loaded into my huge, old, restored, classic, 4-door ‘59 Chevy Nomad station wagon, and invaded Western Costume Company in Hollywood.  They’re largest in the business. 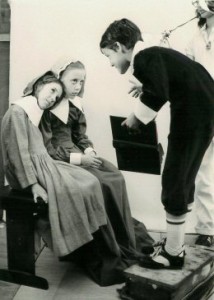 Sure, they had Pilgrim outfits!  All handmade, just like the originals!  So, we rented a bunch of outfits and I “persuaded” the kids to pose for my drawing.  “Can’t you guys ever stand still and be serious for two seconds in a row?”, I pleaded, as they pushed each other off the box I had them on.  Finally, with photos in hand, I started on the original design I had in mind, a large, black-pencil drawing, five feet tall.  This sketch was supposed to precede a color painting, but the austerity of the black and white came to seem more appropriate.  The kids, Kevin Pearson, and Kerri and Dianna Marshall were my models.  They had no idea we were making art history.  Neither did I.

Steve Schiffman, a Jewish-Christian friend who was also working with the American Vision project, called me constantly about the art.  I told him he could see it at the steering committee meeting in San Francisco.  “Just trust me.  You’ll like it!” I insisted.

The steering committee met, and with the top edge of the drawing tacked to the wall, and with Steve and the others watching, I let it unroll all at once.  Steve shouted for joy when he saw it.  When I sat down by him he gave me a big, Jewish kiss on the cheek. 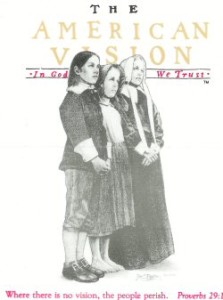 “Fabulous!” he declared.  “Let’s enter it in the “Christians in The Media” Art Contest.  We did.  As usual, Steve made himself a nervous wreck over whether it would win or not.  “The little girl’s stomach is too…poochy.” he worried, referring to my eight-year old daughter, Dianna.  “That’s the way little girl’s stomachs are when they stand like that.” I insisted.   “OK, already!” I agreed to flatten it, a little.  Next, it was “She’s barefooted.” “Yeah,” I reminded him,” they’re Pilgrims. They didn’t wear shoes if they didn’t need them.”

He kept up this worried dialogue until the night the contest winner was announced.  My Pilgrim kids, with the poochy stomachs, won first place!

More than twenty years has passed since The American Vision project. I was honored to work with men like Steven Schiffman and others like John Quade and Marshal Foster. It was a joy to work with men who were even then at the front lines of making Americans aware of our wonderful Christian heritage.  Their lonely struggle no doubt helped create the market place such efforts enjoy today.

This wonderful poster art was printed almost as large as the original, just under three by five feet.  I happen to have a couple of prints left.  I’m very partial to them and it would take some serious money to interest me in getting them out of storage.  If you want to talk about it, please call 806-675-7777.