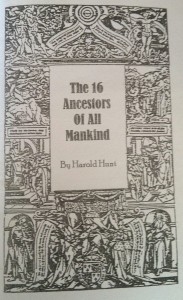 After the Genesis Flood, Noah and his family stepped out into a brand new world.  They came down from Mount Ararat, fanned out into the cast empty places of the earth, and began to repopulate the world.

The names of those sixteen men are recorded in the tenth chapter of Genesis.  For over four thousand years those exact names have been attached to the religions where those men settled and raised their families.  Their names are so firmly written on the geography of this planet that the ages have not been able to erase them.

Modern skeptics, with their evolutionary turn of mind, question whether there ever was a world-wide flood, or whether Noah ever existed.  One of the may things they cannot explain is: if Noah and his family never existed, where did those names come from?  How is it, that, for over four millennia, those names have been preserved by people, most of which, for the first two thousand years, had no knowledge that the Bible ever existed?