We have lost a great friend, but he has gained Heaven
Memorial of John Quade by Joe Taylor

Most people knew John Saunders (April 1, 1938 – August 9, 2009) by his stage name John Quade, and saw him only as an actor who played bad guys or dumb guys. But he was neither. His friends knew him as one of the most intelligent well-read thinkers they ever met. Acting was a way to feed his family and fund what was his real passion…the cause of Jesus Christ and America’s true Christian history. He says it best in this ad for the foundation he helped start: 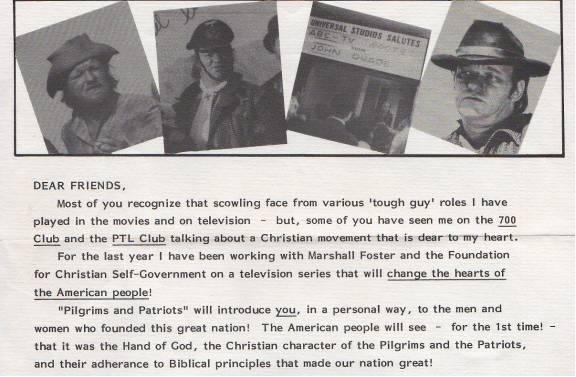 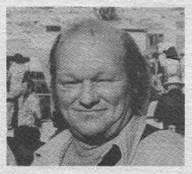 In the late 70s and early 80s, John and I drank a thousand cups of coffee and white sugar chased with donuts and lemon pie. It all started at Bobby Burns Café onLaurel Canyon Blvd. My favorite spot was at the end of the counter next to the wall. It was John’s too. One night I went in to work on some project and this big guy was sitting in MY place. The next time someone else was in “our” place and I took the stool between him and John. Quade’s pants never went all the way up and his shirt never went all the way down. This was because he was bent over a book and a notebook reading and taking notes. At his feet was the biggest briefcase I had ever seen and full of books.

Then I noticed that he was making notes on a yellow note pad; very neat notes. John’s hands were huge. But he was writing very tidy notes. “Who is this guy?” I wondered. So, I decided to look over my right shoulder and see what he was reading. It was “The Institutes of John Calvin! I couldn’t believe that this big rough looking guy would be reading, of all things, The Institutes of Calvin. This was my territory. Being a Primitive Baptist, I knew all about Calvinism, the five points of Calvin and etc. So, I looked at this bear of a man with the squinty eyes and said, “I can show you some Arminianism in John Calvin.” This broke his concentration—something very hard to do – “And with those squinty eyes smiled and said, “Well, you better show me that brother” Bob Burns Café was never the same again. 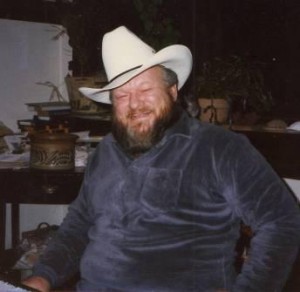 For a several years we and a few other guys, all big brains with extreme educations and credits, met on a regular basis and discussed everything that was important. John could quote every philosopher known and since he had a virtual photographic memory, could punctuate his point with paragraph and page number. And one would think that with a group of such highly intelligent well-educated men that ego would get in the way. Not so. I don’t believe any one of us was trying to impress the other. We wanted to learn something. We wanted to pursue something to its logical extension and see if it still sounded right. More than once, one of these men who had personally read thousands of books each, would stop me or one of the others and, like a little kid, say, “What does that mean Joe?” One night John and I had theorized and philosophized and theologized all the way through dinner, through desert and were on our fifth cup of coffee when I made some statement about faith. Suddenly, John’s huge hand slapped his forehead and he looked like a statute. He sat like this, motionless for over a minute. Finally, I carefully asked…”Uh John….are you all right?” Another minute went by and finally, with a voice drained of all the intense emotion of two minutes before, he said, “Do you realize….this means that I have to completely re-think my position on …faith?”  Anyone with a big ego would have never admitted that he had to re-think something important. But that is one of the things I really loved about John. He wanted to be right about the things of God. 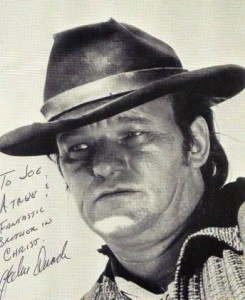 He wasn’t devoting his energies to be famous, or rich. He wasn’t interested in any women but his own wife. He wasn’t even protective of his own intellect. His favorite challenge to others was their need to be “epistemologically self-conscious!” He wanted to understand. “The Greeks had a problem with knowledge.” He liked to say. “They never could figure where knowledge comes from.” They lacked the knowledge of God. That’s what John wanted more than anything, was the knowledge of God. For someone who knew him for 31 years, I can tell you, he loved God because he knew Him. I believe he would say that to all the rich and famous people he worked with. Seek the Lord with all your heart and you shall surely find him. Nothing else matters.

John appeared in over 150 films. But before he became an actor he was a Green Beret and one of the engineers who worked on the landing pod of the first moon shot. Most people also don’t know that he also had a beautiful singing voice and was in the well-known folk group The Christie Minstrels. He and I used to sing “My Fair- eyed boy” We even got it on tape once. Ever heard of the BYRDS? One of their first big hits was “Turn, Turn, Turn”. John was the one who encouraged Gene Grant in his music and he later joined the Byrds.

In the 1980s John became an expert on law and lectured all over the country. He discovered that American law is based on God’s law but he also discovered that God’s law, common law, had been replaced by a system of commercial codes. He wrote extensively on this and some of his books and lectures are on line. 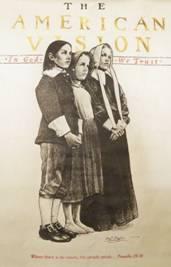 John and I had become friends in 1978 and were working on the proposal for his major film production called The Mayflower Project and The American Vision. This was at about the time he did the Clint Eastwood film “Every Which Way But Lose.” Another Christian friend and I went to see it. And since he was becoming recognized as a Christian leader, we were critical of him appearing in a film that was so profane and with the typical caviler immorality. This brought him to tears. He agreed, but had already signed with Clint Eastwood to be in the sequel, Every Which Way You Can. A few days later, he gladly reported that Eastwood had agreed to re-write his part. But what happened put a permanent breach between John and Clint. Eastwood told John, “Yeah John, we’ll re-write your part.” And that he did. Eastwood’s new lines insulted John personally, but more importantly he insulted his religion. I don’t think John ever did another film with him and I have personally avoided watching any more of Clint Eastwood’s films myself.

In Hollywood, to refuse to do a movie because of moral convictions was considered a big “no no.” More than once, we sat in Bob Burns while John read the script to a new movie and after a few pages, he’d say with quiet regret, “I can’t do this.” I’m sure he turned down hundreds of thousands of dollars in acting jobs just based on his moral convictions. This was further exacerbated when he ran for California State Representative as a staunch conservative. And this probably got John black-balled to a large extent.

One actor who became a friend of John’s was Steve Mc Queen.  Mc Queen was probably best known for his movie, “The Great Escape” where he escapes the Nazis on a motorcycle. He was an excellent bike rider in real life. John was making a film with Steve, probably in the mid 70s and during the film while standing around the set, he had been talking to Steve about Jesus and the Bible. Not long after, Steve sent word to John by a personal friend that he wanted John to know that he was going to church. He’d sneak in and sit in the balcony so as not to be recognized. He didn’t want to be a ‘celebrity Christian’. He wanted him to know that he had gone to everyone he could and apologized for things he had done and asked their forgiveness. He wanted John to know that he remembered everything John had told him. When McQueen died, they found him in his bed with his Bible open on his lap. It really touched John emotionally that he had affected Steve. 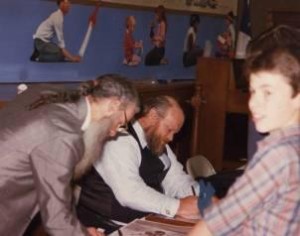 In 1984 I moved back to my hometown of Crosbyton and began fossil collecting in earnest. In 1985 John came out to speak at the unveiling of a big mural I had painted of our County’s history.

While he was here I showed him some of the local fossil beds and what they meant to us as Creationists. We began discussing making films about real fossils and real excavations for the Creation message. John had already researched the debate between Creation and evolution. Books from his personal library were some of the first in my own research. In recent years we discussed the viability of a TV show about our fossil work. Then in 2002, my life and everyone around me took a turn for the bad and got worse. People claiming to be Creationists became involved in our digs. Within a year, we had lost a major dinosaur, a major dinosaur site and finally the loss of my reputation and watched as 25 years of hard work crumbled, resulting in the closing my large fossil museum. John saw what was happening and it infuriated him, because some of the people involved were champions of John Calvin, home schooling, America’s Christian heritage, and low-budget Christian films, all of which John had been very active in the founding of. The dinosaur we lost was an Allosaur. John got with some writers and researched the project thoroughly and began putting together a film about the story. His partner in the film, Henry Johnson died while working with John on it. But despite our mutual frustration at all of this, he saw a positive future. He was working on plans for a school of film here at the MT.Blanco Museum as well as a proposal to fund a major series of fossil digs for Creationists. Set backs and adversity didn’t keep John from continuing the work, nor will it ours.
John was a family man. He and his wife Gwen had six kids. And there was no difficulty in telling who their dad was.  My kids loved him too. He bear-hugged everyone, even poor homely little old waitresses wherever he went. This made their day and they loved him. One of my favorite photographs of me and 7 of my kids was taken by John, of all places at a meeting at the offices of The Foundation For Christian Self Government. We were there for a discussion. 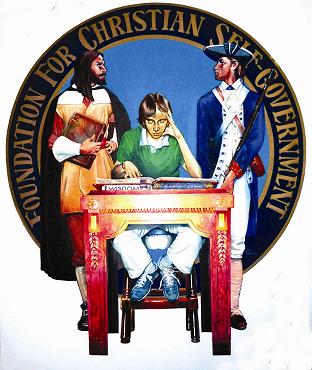 After the Saunders moved upstate, John would come down to read a script and stay with us. He always slept on the couch, always on his side, apparently never moving. In the morning there would be a big John-sized dent in the cushions. Rest in peace brother. 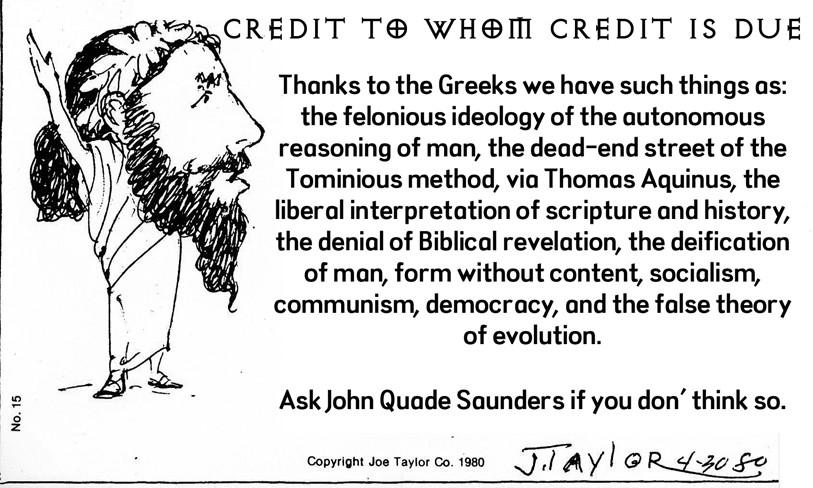