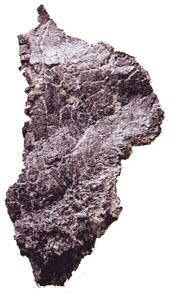 This plate is from a discovery in July, 1995 by Dr. Carl Baugh.  A twelve-year-old girl from a local ranch led Dr. Baugh and team to a lone outcrop.  Twenty feet away, the end of a large femur and this plate were uncovered.  Very similar to a tree leaf, the base tapers from a few inches thick to less than 1/8″ thick at the top and has a surface pattern resembling the veins of leaves.  These plates, set in one or two rows, were not attached to the top of the spine but apparently held in place by cartilage

Half of the plate had eroded away before discovery.  One of the most interesting things about this fossil is that it has bite marks though it, probably made by some large allosaur type or crocodile.

The Morrison formation, covering much of Colorado and Utah, is famous for the vast dinosaur remains it holds.  These bones are mineralized in black or red, but have a green patina in some areas and are sometimes radioactive due to uranium in the rock.  The matrix encasing the animals is from soft grey-green clay to rock so hard that a jack hammer is required to free the bones.  Just beneath this grey clay-rock layer containing this stegosaurus is a very hard 6″ layer of brown rock in which was found large blueish grey bones and one large allosaurus-like tooth.  Twelve feet above the stegosaurus are glassy brown turtle bones.  There are parts of ten animals buried here, some of which are upside down, indicating a liquid and rapid burial.  This confirms what we would expect to see from the Biblical global flood a few thousand years ago.