Mt. Blanco Fossil Museum is now offering casts of a very strange and ancient skull that Joe Taylor molded in Parachas, Peru in January of 2013.

Joe was part of a research and film crew who were invited to examine 30 skulls in Juan Navarro’s Collection in the Parachas History Museum in Parachas, Peru. http://paracasculture.com/paracas-history-museum/
Led by L.A. Marzulli, the team was taken to many strange places. Marzulli and team were searching for evidence of the mysterious descendents of the Biblical Nephilim.
This skull is strange. She has no visible parietal suture in her skull, that is, the joint between the two halves of a normal parietal, the mid section of the normal skull.

There is also no evidence of a suture between the two halves of the frontal, the front part of the skull. The occipital suture line instead of being a round curve is almost rectangular in shape.
She also has a one-half inch separation between her front teeth. Many of the skulls were like this. She also had a deviated septum and flattened nasals.
In the temporal region, on the side of the skull, there are four extra bones! And in the suture between the frontal and parietal there is an extra bone on each side; one square-shaped and one like an 8 pointed star!
One medical doctor examined our cast and wondered if it was “human.” A Doctor I showed it to was puzzled and didn’t know what to make of it. A chiropractor exclaimed at how many extra bones she had in the skull.
Everything in ancient Peru was strange. Was this woman a descendent of the sons of God who married the daughters of men? What accounts for all of these abnormalities??
You can learn about our research from LA Marzulli’s WATCHERS 6.

The cast of this strange skull, known as Chamacho #18, is $250 on stand, plus shipping. Colored like original. 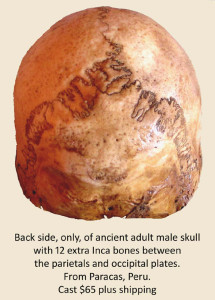 Replica of the back of the skull ONLY – including ICA bones