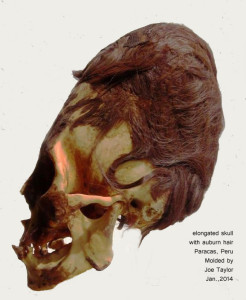 In February 2014, a story circulated on the web about finding DNA in an elongated skull, which said it had no known human ancestry!  Joe Taylor molded that very skull and Mt. Blanco has been offering casts of it.  However . . . there was a big mistake.  While the skull that Taylor reproduced is the same skull pictured in the stories all over the web, the DNA actually came from a different skull.

The story originated with Brein Foerster who was the tour guide for LA Marzulli research team that Taylor was a part of.  Everyone of the Marzulli team was alarmed that DNA could have been extracted and tested within two weeks of their return to the States.  When questioned, Foerster  explained that in fact, the DNA was taken from another skull two years before and not from the skull whose picture went viral and that Taylor had just molded.  Indeed, we hope to get DNA tests from that very skull .

The skull in the photograph is shown with it’s hair still intact.  In order for the skull to be molded, Taylor carefully removed the hair during the molding process and then restored the hair to the skull exactly as it was.  Taylor unique method opens up new possibilities in the reproduction of delicate archaeological specimens.

The Marzulli team documented their work and can now be seen in their new DVD, titled WATCHERS 8.  They are continuing the process of working with Peruvian authorities and securing DNA and other scientific tests, such as looking for particles of volcanic ash that might have been in the air when the specimen was buried, searching for pollen to determine the climate ecology, and of course, tests like Carbon-14. The Marzulli team was particularly interested in the possibility of determining the racial affinities of the amazing ancient Peruvian people. Could they be related to the Nephilim and their giant offspring spoken of in the Bible?