Skull and jaws mounted on wood base: 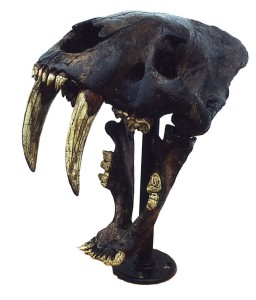 Nearing the size of today’s Bengal tigers, these cats sport the largest canines of any of the cats, living or fossilized. That the canine of a fossil lion was found driven clear through the leg bone of another, evidences the power of these large cats, and the incredible strength of their teeth.

Although we do not know the coloration of these animals, it is clear that they had stubby tails, like a bobcat. Most likely they were exclusively carnivorous, though they could have been used to eating vegetation as well.

These cats among thousands of other animal remains were excavated from tar seeps near downtown Los Angeles, California. The massive graveyards made by these pits are probably post-flod. Huge tar impregnated bones of mammoths and other animals were used as fuel by early pioneers to the area. The pits were so full that bones showed on the surface.

The bones of a woman were the only human remains found in these pits.

Some evolutionists give these bones an age of 10-25,000 years. We believe they are probably less than 4,000 years old.

Some creationists have speculated that these animals were swept into the pits by Noah’s Flood. The facts, however, probably fit a slow accumulation over a few hundred years.

Facts: The pits cover several thousand square feet. They are 20 feet deep in places. Tar and gas have continually come up from the ground. Streams of water flow over the seeps, carrying sand into the tar. Animals coming to drink would unknowingly stand in the tar and become trapped, becoming easy prey for carnivores. About a thousand of these big cats, as well as over a thousand dire wolves and even more coyotes, are all found together which strongly suggests that they too were trapped while preying upon the other unfortunate creatures.