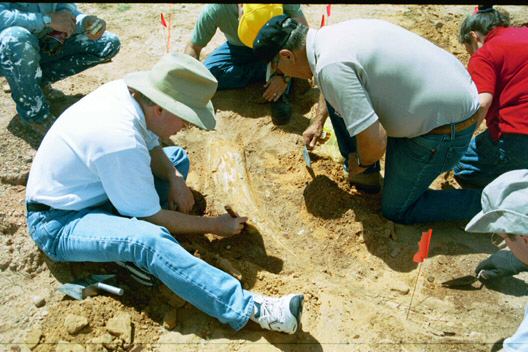 Several “How To Build Your Own Fossil Museum” conferees work at excavating a mammoth tusk which measured at least eight and one half feet long.
One day in March 2001, two arrowhead collectors were searching the shore of Lake Champion, a reservoir near Colorado City, Texas when they came a across an unusual object. At first they thought it was a log. On further examination it looked like it might be a bone or tusk. They alerted officials at the nearby Heart of West Texas Museum in Colorado City. They, in turn, contacted Joe Taylor, director of the Mt Blanco Fossil Museum and commissioned Taylor and the Mt. Blanco team to excavate the mammoth.

In late April Taylor brought several conferees from the just completed “How To Build Your Own Fossil Museum” seminar to begin the dig. During the rest of the summer Taylor and his team returned to the site on several occasions to excavate more bones. Parts of two tusks, numerous ribs, parts of several vertebra and other bones were uncovered. Also found were three articulated vertebra that at first appeared to be from a bison. 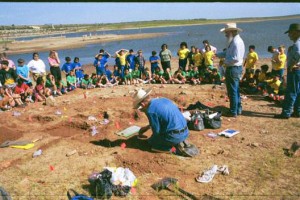 Joe Taylor spoke to over 600 public school children about the excavation. Taylor explained that the facts of this dig agreed with the creation explanation rather than conventional evolution theories and that these bones were probably only hundreds of years old and not tens of thousands. 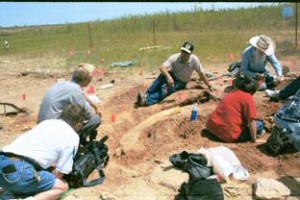 The local media became interested in the excavation. Here is a news team from a local area television station who covered the ongoing event. 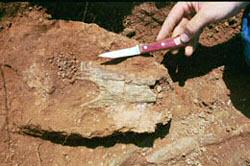 The first mammoth vertebra was found during the actual filming of a news program from Channel 8 in Dallas, Texas. 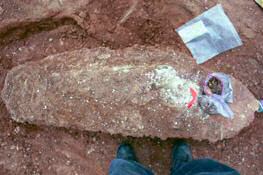 Another partial tusk was found later during the dig. 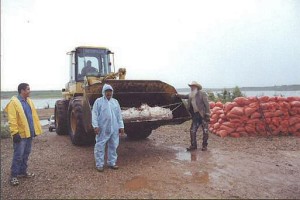 The Colorado City maintenance crew helps move the massive field jacket containing the Mammoth tusk. The field jacket weighed between 600-800 lbs. Rain or shine we get our bones. Lake Champion is in the background. 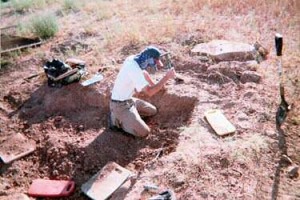 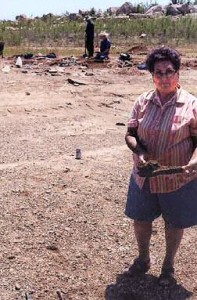 Visitor to Lake Champion site found a piece of mammoth femur 50 feet from the site. 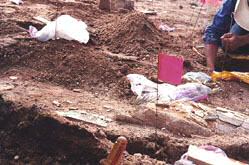 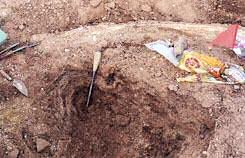 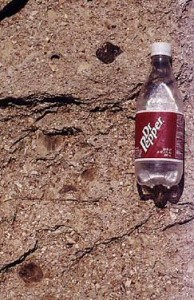 Triassic bones from sandstone above the Lake Champion site. The mammoth was probably washed into the lower level after the crocodile-like animal was buried. The Triassics are supposed to be 180 million years old, but this site is similar to a vast area of West Texas where one finds supposed “recent” mammoths laying on top of older Triassic fossils but with 170,000,000 years missing. There is no evidence that so much time has passed between the two fossil layers. 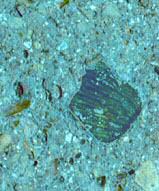 Scute (bony plate) from ancient crocolidian armor from the coarse grey sandstone above the level where the Lake Champion mammoth is buried. The bone is from a Triassic crocodilian. 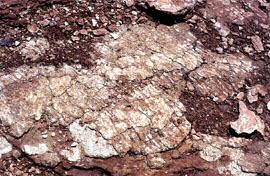 Lake Champion was buried in red mud of the so-called Triassics. These layers of grey and red shale show rapid burial. The grey layer has ripple marks, evidence that the Triassics were buried suddenly. 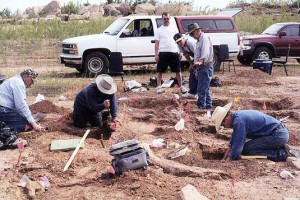 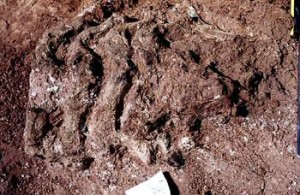 Five vertebrae of the articulated neck of the Lake Champion mammoth, before being field jacketed, and before being nearly destroyed by unthinking curious visitors. This was the best find of the dig. 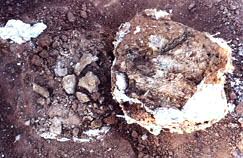 “This is the articulated neck vertebra after some idiot turned it over, breaking all the five neck vertebrae right down the middle,” said Joe Taylor. The damage was done after we left for the day. Vandalism or curious idiots is always a concern at a dig. 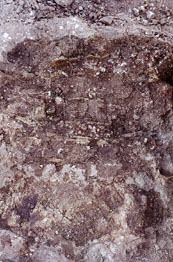 Five articulated vertebrae of the neck of the Lake Champion Mammoth, after some clowns broke them all in half. 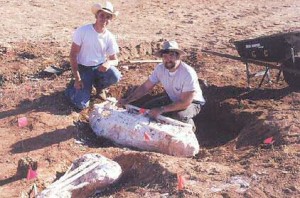