The Mt. Blanco Fossil Team, under the direction of Carl E. Baugh and the Creation Evidence Museum of Glen Rose, Texas, has worked at excavating a major Dinosaur graveyard in Northwest Colorado for several years. The site, located on a private ranch, has yielded the remains of at least ten different kinds of dinosaurs and other animals, and is part of the Morrison Formation of the Jurassic group. This is an ongoing excavation. Work here has been happening twice annually since 1995. The bonebed is far from exhausted. The actual excavation is in the right center part of this photo in a rock outcroping on the side of the mountain. 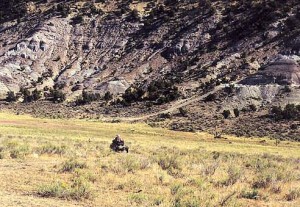 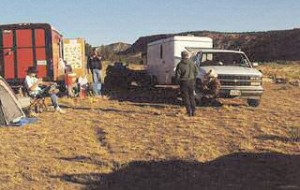 The basic camp for the excavators is about a mile way from the actual dig site. 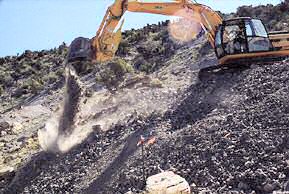 A large backhoe operated by expert, Corky Underwood, removed a great amount of the excess overburden from the dig site 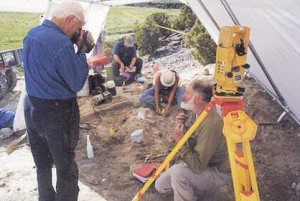 Site photographer Burton Stokes flanked by survey equipment takes video of one part of the dig while multiple bone fragments were being unearthed. Dave Babbit (right, kneeling) is the site surveyor who has been responsible for mapping out the grid patterns that help document the placement of the bones. 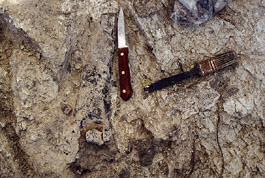 Probably some leg bones of a smaller dinosaur from the same location as the photo above. 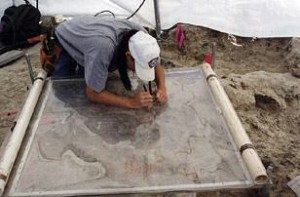 Laura DeFord of Creation Evidence Museum works on a site mapping table for one grid section of the dig. 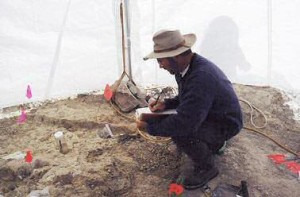 Mt Blanco associate director, Don Ensign drawing a map on the grids that shows the location of the dinosaur bones. 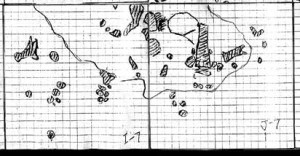 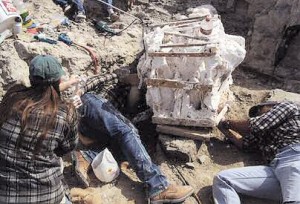 Left:Joe Taylor (center) and Terry Beh (right) are removing the pedestal beneath a large field jacket containing several bones. The strenous excavation process is a distinct change of pace from Terry’s normal routine as a freelance writer. This site has been visited by a number of interesting individuals from various scientific and scholarly fields. 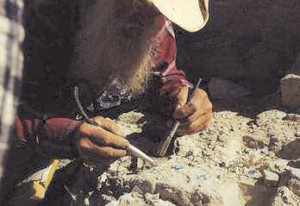 Taylor using a brush and a small air powered “Chicago” pnuematic chisel to uncover details of a bone to determine what it is and which direction to excavate around it. 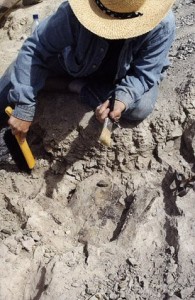 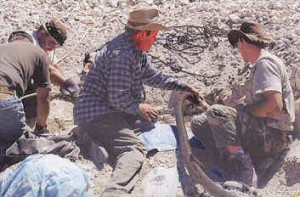 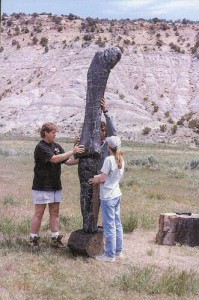 Three visiting NASA scientists hoist the casts of our Diplodocus leg into life position for a snapshot.

The casts are resting on part of a large petrified tree trunk which the Creation Evidence Team excavated from 100 feet above our site. The tree is petrified, BUT its bark isn’t. The first C14 tests we received said the bark was 5,000 years old. We think this is one Carbon date that is probably right.