The Taylor Trail is finally cast! 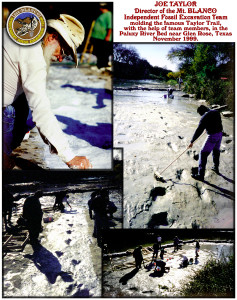 The Taylor Trail is the most controversial fossil track way in the world. Were these mysterious footprints made by a giant man? They certainly appear to be human. But at the same time as a dinosaur??!

And therein is the problem. Evolutionists have insisted that the limestone is eighty million years old. So therefore they believe the tracks cannot be human since humans and dinosaurs supposedly did not exist at the same time. There are numerous dinosaur track ways in the very same layers of limestone. There is even a dinosaur track way that goes right across the Taylor Trail.

The tracks were exposed in the 1970s by Stan Taylor (no relation to Joe Taylor of the Mt. Blanco Fossil Museum.)   Then in 1999 Joe Taylor made the molds. The tracks are in a layer of limestone in the Paluxy River near Glen Rose, Texas and stretch for fifty feet. All fifty feet were molded and now cast.

The tracks were almost impossible to mold. But Don Patton and a team from Carl Baugh’s Creation Evidence Museum sand bagged the river and dried the track layer long enough for Taylor and Don Yaeger to coat them with latex rubber overlaid with a plaster mother mold which was necessary to keep the molds in place.

The cold short November day was really not enough time to let the mold cure, but Joe Taylor waited as long as possible with the team using hair dryers powered by a generator to dry the latex. Taylor could see the water creeping up through the limestone and all hands worked to cut the mold into nine sections about five feet long and placed them immediately back onto their mother molds and they were carried across the water in the dark. 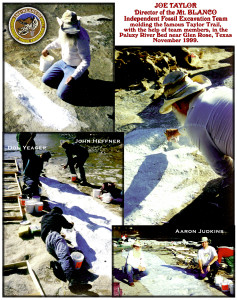 This track way has been the source of probably the most heated debate over the question of men and dinosaurs living at the same time. Evolutionists have devoted volumes to try and prove they are just dinosaur tracks. But just as many Creationists say they are human.

WELL…now everyone can study the tracks for themselves and they don’t have to wade in knee-deep water to do it. I consider this one of the best things I have ever done for the scientific study of paleontology and the question of origins.

Special thanks to Drs. Carl Baugh and Don Patton for their persistence in studying these tracks. They are a lasting tribute to the many men and women who worked to make molding them possible. Come and see!

The public as well as the scientific community is invited.  Doors will open Thursday April 12th, 2007, from 9:AM to 9:PM here at the Mt. Blanco Fossil Museum in Crosbyton, Texas 124 West Main, 32 miles east of Lubbock.  We’re on the town square on Hwy 82 which runs through Crosbyton in front of the museum.

For all those on both sides who have commented on, avowed or disavowed or ever wondered about this most famous of all fossil track ways, now is your time to come see it for yourself.  Everyone may stay as long as they like.