Please note: as of 2014 the Chupacabra is gone to the Lost World Museum in Phoenix, NY.  It is no longer at Mt. Blanco Fossil Museum.  Thanks to John Adolfi for loaning it back to Texas for four years

Controversial Ft. Worth Star Telegram article about the Chupacabra

“Reporter” Bud Kennedy of the Ft. Worth Star Telegram, used the excuse of doing a story about the chupacaba we have on display, to trash the Mt. Blanco Fossil Museum. He quoted a woman with a Spanish last name who said she was insulted. How I don’t know. I called Mr. Kennedy for her contact info and he went on to tell me there was no such thing as a chupacabra and that my whole museum was a fraud. Had he ever been here? No, his mind was made up. I was just some worthless “religous” museum. No example of fraud was given. He said no scientist believes in the “chupacabra”. And apparently, the fact that I took the fresh carcass to a major forensic lab for scientists to examine didn’t matter. His closed mind was made up. I told him he was a racists and a bigot for saying all the Mexicans who have come in to see the chupacabra were idiots for believing in them. It’s no longer a myth.
He also stated in his stupid article that the chupacabra is SIX feet tall. I never said any such thing. It is clear that the animal is some sort of canid. We hope the lab results will tell us what it is finally. It is really pathetic what passes for reporting today. 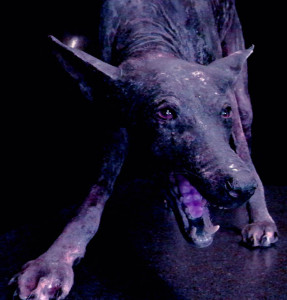