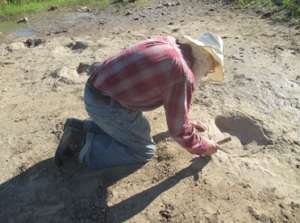 Out in the boondocks very close to the place where Texas, New Mexico and Oklahoma come together at the foothills of the Rockies, is a dry creek bed that tells of the massive and immediate covering of fresh dinosaur tracks under hundreds of feet of sediment. The canyon bottom they are found in was formed by the water returning into the ocean during the abatement of Noah’s flood which cut similar canyons all over the world!

Since the flood, 4,500 years ago, local rains have continued to deepen the canyon eventually exposing the layer of dinosaur tracks which has now turned to stone.

Dr. Jerry Simmons of the Heart Of America Science Resource Center, and science professor at Barclay College both in Haviland, Kansas invited me up to see and mold these tracks in May 2016.

A group of volunteers cleaned the dirt from two good tracks and I began immediately to coat them with latex rubber mold material. When they were cured, I made a “mother mold” of them which was removed as soon as the plaster was set up. The next day, I made a first cast from the mold which turned out beautifully. This went to Jerry’s school and museum.

What these tracks tell us is that a layer of mud was laid down over a vast area. One lone dinosaur was walking north west, apparently fleeing the rising waters of Noah’s flood. They do not tell us that this area was exposed for any length of time, as the tracks are in excellent shape showing no weathering. The single dinosaur trackway which went on for hundreds of feet, and probably for miles, says that this was not where herds of them lived. These tracks like so many others in the world cry “Flood!” and that the Bible is true. There really was a worldwide flood.

Just north of the tracks which we molded, were what appeared to be three human tracks. Had time permitted, they would have been molded too and casts made so they could be studied under controlled lighting.