GIANT 4-TUSKED MASTODON
FINALLY UNVEILED!
The LONE STAR MASTODON came home to SAN ANTONIO, TEXAS on December 5th, 2005 where the Mt. Blanco Museum and a group of friends who worked on this project were gathered to reintroduce the world’s largest known mastodon to its old stomping grounds.

It is for sale. *  We have called it the million dollar mastodon for fun and indeed it is ten times rarer than anything like it, but we will sell it and Mt. Blanco Sales will be glad to consider any reasonable offer. Contact Joe Taylor at the museum;  806-675-7777, fax 806-675-2421, e-mail mtblanco1@aol.com

After a year and a half and thousands of hours, this one-of-a-kind world class specimen rose from its sandy grave in the Colorado River at La Grange, Texas, and with a lot of help, regained some of its former glory. 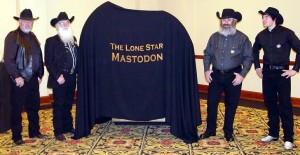 The unveiling event was unique in itself, on a par with other major fossil unveilings. 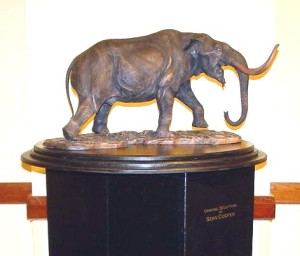 A sculpture was commissioned for the event. Sean Cooper’s fabulous recreation is a stunning piece of work. The first bronze of it is at the foundry now

A documentary film short was made. A DVD player is disguised as a name plaque on the base of the skull.

An orchestral piece was commissioned for the film short.

A display of other fossils found with it was created as a separate display piece. It will go with the real skull to its permanent home.

The braincase of the skull is lighted by a tiny LED. This has never been done before.

The hollow root cavity of the right tusk is lighted by an LED. It looks like an ice cave inside! Appropriate for this King of the Ice Age. 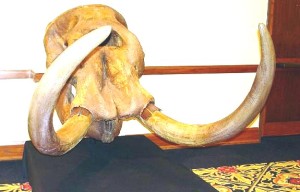 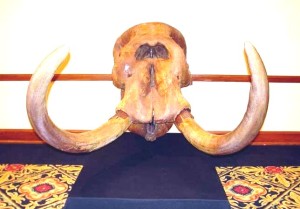 The skull of the Burning Tree Mastodon, which is considered to be one of the largest mastodons, was on display at the unveiling to show just how big this new one is. Plus, the Burning Tree specimen is not even a 4-tusker.

A book was written on the transformation of Lone Star from its shattered pieces as they were found by the gravel pit operator. It was documented through every phase.

Our favorite harpist, Chantel Lines, who worked on removing the extremely hard matrix, was beautiful in a long evening dress and graced the unveiling by accompanying on the harp during removal of the veil. 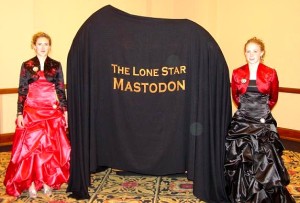 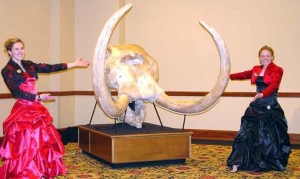 And two lovely sisters, in stunning dresses made for the occasion, Callie and Linsey Gavin, came all the way from New York State, to do the honors of drawing the long black veil off the skull while Chantel played. The Gavin girls and their dad also worked on the preparation of Lone Star.

Family and friends joined the press and Mt. Blanco staff at the Hilton Hotel on Blanco Road in the Lone Star ballroom to unveil the Lone Star Mastodon. We thought the tie-in was fun and everybody had a great time with the friendly staff at the Hilton. Something very interesting, though unrelated, happened while we were there. A young Mexican lady told us a really intriguing story of two of her friends being attacked by a “giant bird with no feathers” in a village in Mexico. We hope to do a full story on this later on. Keep posted.